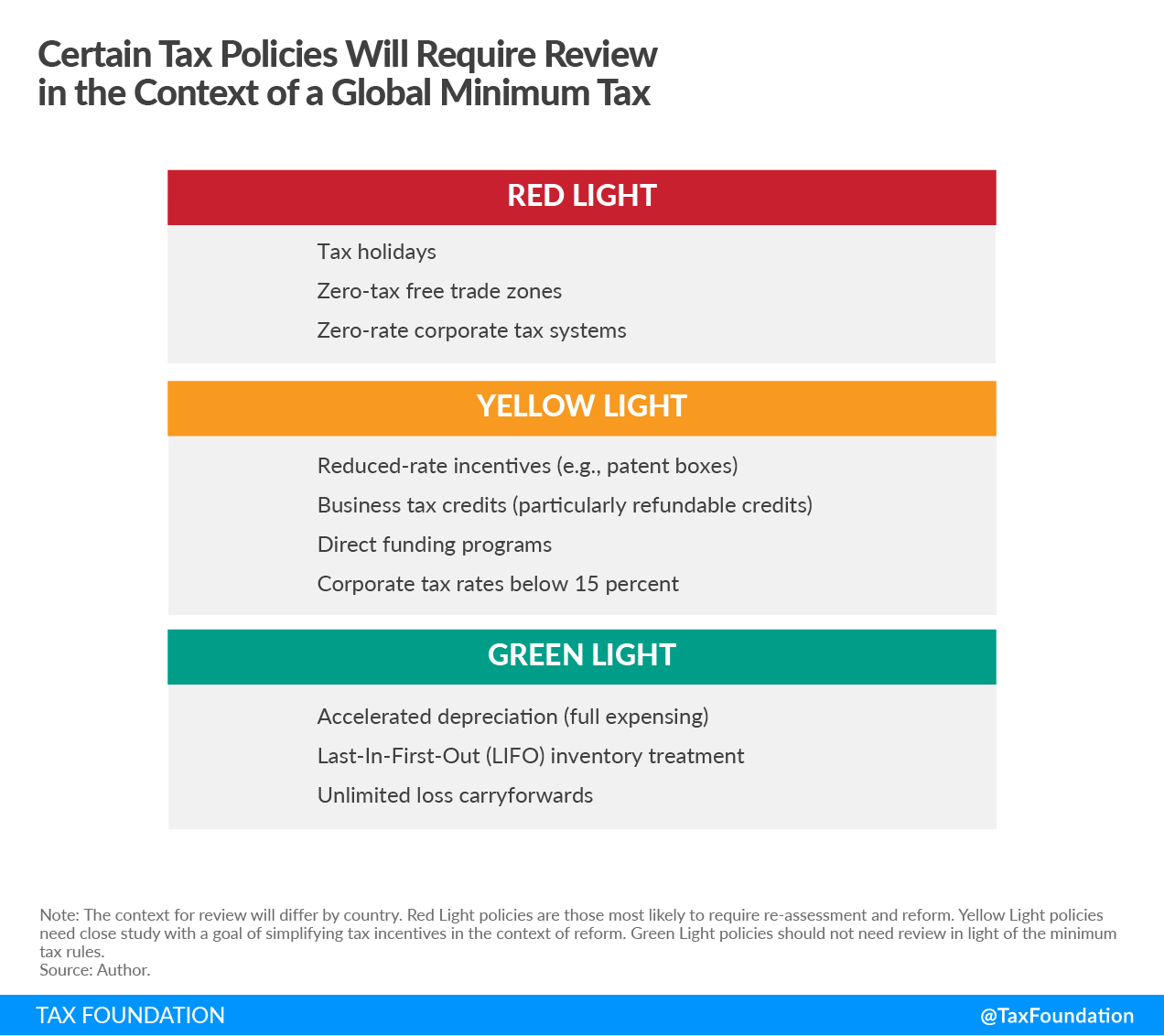 Today, the Organisation for Economic Co-operation and Development (OECD) released model rules for the global minimum tax (also known as Pillar 2). These rules are designed to apply to multinational companies with more than €750 million in total global revenues and place a minimum effective tax rate of 15 percent on those company’s profits.

In the coming days, countries will be considering how to incorporate these rules into their national tax codes. The rules are complex, and some countries may opt to put them in place on top of preexisting rules for taxing multinational companies. However, countries should also consider ways to reform their existing rules in response to the minimum tax.

The global minimum tax rules do not require any changes in domestic tax law. The approach is voluntary, but if enough countries do enact the rules, then even countries that do not adopt them should evaluate their tax policies with an eye toward simplification, revenue-neutral reforms, and policies that support investment which would not be eroded by the minimum tax.

Many jurisdictions around the world offer tax preferences or structure their tax rules in such a way that allow companies to be taxed at rates below the 15 percent rate envisioned by the minimum tax.

The global minimum tax can create problems for those policies, however. For example, let’s say a large multinational company headquartered in Country A makes an investment in Country B which is eligible for a 10-year corporate tax holiday. Even though the profits from the investment will not be taxed by Country B, the global minimum tax would allow Country A to apply the minimum rate of 15 percent to those profits.

Country B may choose to change its tax holiday policy to tax those profits locally rather than allowing the tax revenue to go to Country A. If Country B applies a high corporate tax rate to companies that are not eligible for a tax holiday, the additional revenue from shutting down the preferential policy could support a more general tax reform (broadening the base and lowering the rates, as the mantra goes).

Not all tax policies will follow such a straightforward analysis, however, and the model rules are only helpful in assessing policies to the extent that they result in effective tax rates below 15 percent for large multinational companies.

With the risk of oversimplifying, I have developed a rough categorization of the policies that countries will most likely choose to change in the context of the minimum tax rules. Policies facing a Red Light are primarily those that provide a zero effective tax rate. Yellow Light policies provide reduced effective tax rates below 15 percent but not zero. Green Light policies are those that reduce the cost of investment while not triggering the minimum tax unless the general corporate tax rate is very low.

Though the list below is not comprehensive, policymakers can use this framework to prioritize the type of evaluations which will be necessary to determine the direction tax policy should take when the minimum tax rules are in place. Once that evaluation is complete, policies that generally promote investment in fixed assets and local hiring should be prioritized because they will align with the areas where the minimum tax provides meaningful carveouts.

Even in the context of the global minimum tax, countries can and should pursue principled, competitive, and pro-growth policies that provide sufficient revenue while minimizing economic distortions.

Countries that have rules that provide a zero tax rate on business profits either through tax holidays, free trade zones, or because there is no corporate tax face a clear choice in the context of the global minimum tax.

As the example above described, countries can choose to change their policies and collect revenue themselves (potentially in the context of a broader reform) or they can allow a foreign jurisdiction to collect the revenue associated with the 15 percent minimum effective rate.

The choices may be easier for jurisdictions that have a general corporate tax that applies outside of tax holidays or certain zones than for countries that do not operate a corporate tax at all.

The latter will need to assess whether the additional revenue will be worth the administrative costs of establishing new rules and systems for collecting a tax that they had previously chosen to not have as part of their laws. In our recent report, we noted that 15 jurisdictions around the world do not have a corporate income tax.

This category of policies will likely prove more challenging for governments to assess in view of the global minimum tax.

Nineteen OECD countries have a policy that provides either an exemption or lower rate for income from certain patented technology, and in each case the applicable rate is lower than 15 percent. However, Italy has already opted to remove its patent box in favor of new deductions for research and development costs.

There will also be a need to assess general business tax credits since a country providing tax credits for certain activities may find that the companies receiving those credits are simply paying additional tax elsewhere.

Ireland is expected to adopt the minimum tax rules for large multinationals while leaving its 12.5 percent rate in place for all other businesses.

The Yellow Light policies will be tricky to evaluate because they will depend on many factors, including the overall corporate tax rate, the number of companies benefiting from the preferences, and the ambition of lawmakers to undertake a general reform that could eliminate or trim multiple preferential policies with a goal of improving the tax system overall.

The global minimum tax rules do not mean that all business tax policies need to be rethought. In fact, the way the rules calculate the minimum tax rate matters a great deal. The rules use the concepts of deferred tax assets and loss carryforwards that allow some important features of good tax systems to be outside the zone of policies that might need to be reconsidered.

These policies include accelerated depreciation (or full expensing) of assets like the rules that are currently in place in the U.S. and Canada. Super-deductions for business investment as in the UK would also be spared. Many countries use capital cost allowances to spur investment during economic downturns. The policy response to the pandemic has seen eight OECD countries adopt accelerated depreciation in certain circumstances.

Last-In-First-Out (LIFO) inventory deductions allow companies to deduct the cost of inventory at the price of the most recently acquired items and therefore help mitigate the impacts of volatile prices or inflation. This lowers the tax cost of acquiring inventory. Fourteen OECD countries allow businesses to use LIFO for tax purposes.

Finally, policies that allow companies to carry their losses forward for an unlimited time would not need to be reevaluated. The model rules specifically allow loss carryforwards. This allows the tax rules to minimize the likelihood that a business will get caught by the minimum tax rules simply because it is in the start-up phase with significant up-front costs. As with capital allowances, many countries loosened their loss deduction policies in response to the pandemic.

Load Up Now on This ETF
Don’t Buy This AI Stock Yet
Revenues up Triple Digits in the Past 3 Years
Is the Worst Behind Netflix?
Google May Not Be King Much Longer