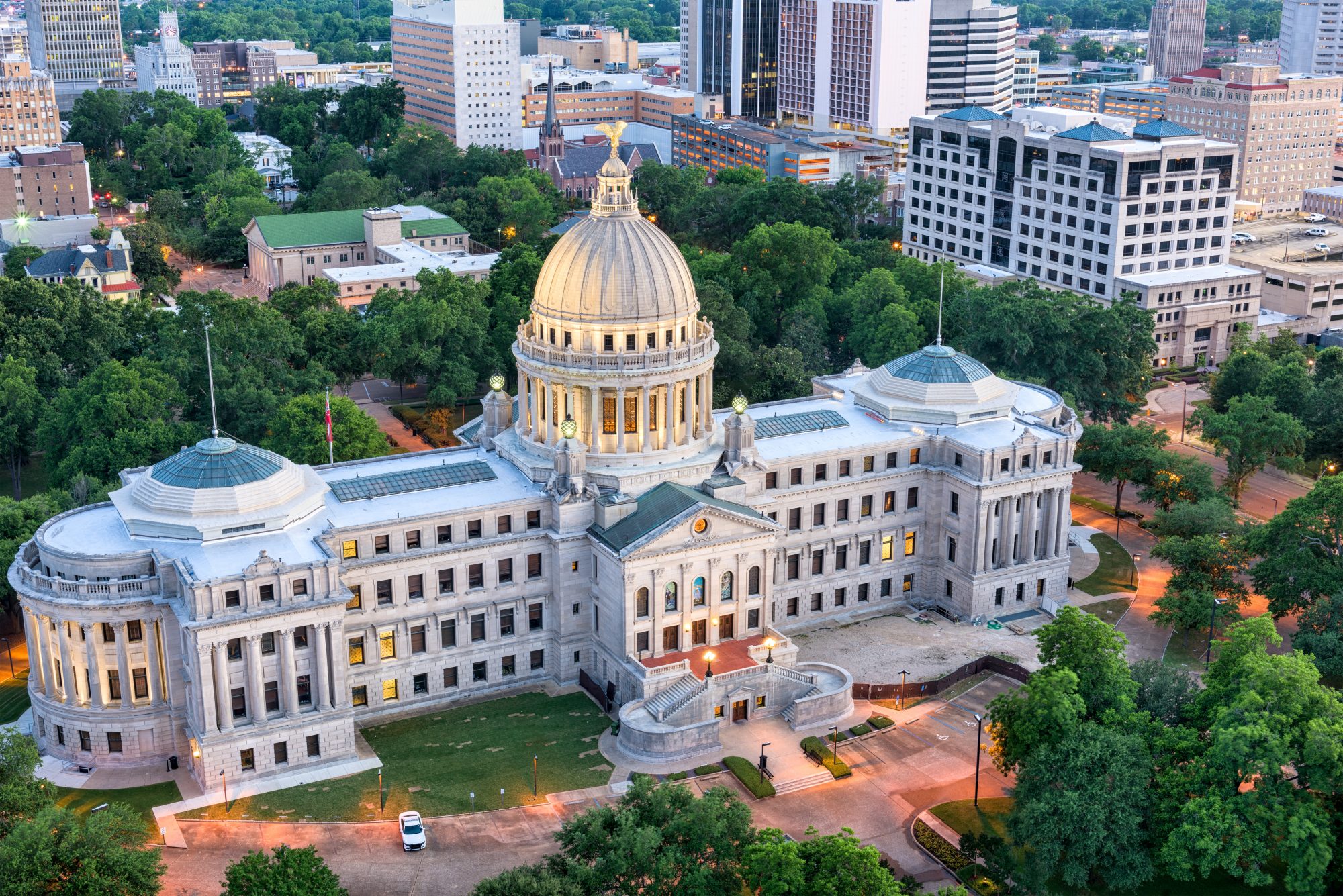 Mississippi, like most states, realized a significant budget surplus in 2021 and projects continued revenue growth over the coming years. As lawmakers in Jackson determine how to best invest these funds, they must also reconcile the state’s position in an increasingly competitive tax environment.

Over the last two years, Mississippians watched as the region was dominated by significant individual income tax reforms. Arkansas set a course to lower its top marginal rate from 5.9 percent in 2021 to 4.9 percent by 2025. Louisiana cut its top rate from 6 percent to 4.25 percent effective January 1, 2022. Tennessee eliminated its tax on interest and dividends in 2021 to become the eighth state to levy no tax on any individual income.

Mississippi policymakers have the incentive and the resources to implement significant income tax reductions in the Magnolia State, or even to affect full repeal over time. To realize the benefits of any reform, however, it will be important to get the details right and to ensure that revenue reductions are sustainable.

Under the Mississippi Tax Freedom Act of 2022 (HB 531), the first $37,700 in income for single filers, or $75,400 for joint filers, would be entirely exempt from income taxation beginning in 2023. The size of the exemption would increase each year, subject to revenue availability, until the income tax is fully repealed. This phase-out would be offset partly by increasing the sales tax rate from 7 to 8.5 percent, and partly by returning future revenue growth to taxpayers. To diminish the impact of the higher sales tax rate, the bill also introduces a reduced tax rate on groceries, which would be taxed at 4.5 percent, down from the current ordinary rate of 7 percent. In the House-passed legislation, however, the revenue triggers could easily implement cuts which exceed inflation-adjusted revenue growth and reduce the state’s budget, an issue addressed below.

Individual income tax reduction is good for economic growth: those taxes influence how much people work, how much they produce, and how much small businesses can afford to invest. When people make decisions, they most often do so on the margins. Workers consider the trade-offs of working one more hour, one more day, or one more week. If the benefits of working an additional term outweigh the cost of giving up that time to do something else (e.g., leisure), people will choose to work. Small business owners, most of whom operate pass-through entities that are taxed under the individual income tax system, make decisions about investment and hiring while considering whether the net income from the added productivity will be worth the additional tax liability.

Over the past decade, states which forgo individual income taxes have seen their populations grow at twice the national rate. The ongoing migration from high- to low-tax states, and particularly states with low income taxes, is likely to accelerate with the growing viability of telework. Increasingly, many people will be able to live wherever they wish. Those who are highly sensitive to taxes will find it easier than ever to relocate to jurisdictions with lower tax burdens, regardless of where their employer may be located. Employers themselves will have more location flexibility as geography becomes less of a constraint on their workforces.

House Bill 531 is designed to eliminate the state’s individual income tax. It gets some important things right, especially when compared with the previous version of the bill introduced in 2021 (HB 1439). One area of significant improvement is the shielding of many business inputs from an increased sales tax. While business inputs like logging equipment, manufacturing machinery, and agricultural equipment are not completely exempted from sales tax, which is preferred, the forbearance at least avoids exacerbating tax pyramiding already underway in those industries.

HB 531 also slows the phase-in of sales tax reduction on groceries. The 2022 bill would lower the sales tax on groceries from 7 to 4.5 percent over a period of six years, whereas HB 1439 would have lowered the rate to 3.5 percent over five years. Although it is preferable to include groceries in the sales tax base in exchange for a lower sales tax rate on all finished goods, policymakers appear to see this as a progressive reform to pair with income tax rate reductions. The limited research that has been conducted on this question, however, casts doubt on whether exempting groceries from the sales tax has the intended distributional effect.

The authors of HB 531 are right to use revenue triggers to phase in reductions to individual income taxes, but the current design raises concerns. The current approach caps state revenue at $6.175 billion, adjusted each year by an inflation factor. Setting a revenue cap is a fine approach to a trigger design, but at present, the inflation factor is the lesser of 1) the quotient of the current year’s Consumer Price Index divided by the base year’s Consumer Price Index, or 2) the product of 1.015 times the number of years since the base year (FY 2023).

To put 1.5 percent growth in context, at the end of December the 12-month change in inflation was 7 percent, the highest rate since 1982. Considerable uncertainty exists over how long it will take for inflation to return to the Federal Reserve’s target rate of 2 percent, but it is not unreasonable to assume that rates could remain somewhere above the target rate for several years. If that occurs, a 1.5 percent cap on revenue growth will significantly diminish the purchasing power of Mississippi’s general fund.

If we take Mississippi’s FY 2023 average price change estimate of 3.3 percent (which seems optimistic) and apply it to the next five years, cumulative inflation would be 17.6 percent. The cap on the state general fund would have to grow from $6.175 billion to $7.26 billion by FY 2028 to maintain its FY 2023 purchasing power. Under the HB 531 design, however, state revenue would only be allowed to grow by a cumulative 7.5 percent to $6.64 billion.

The current bill also does not account for the compounding effects of inflation. If it did, the bill would allow revenue to grow by 7.7 percent. The difference is small, but even small differences matter under this scenario where the state would be faced with a nearly 9 percent reduction to its general fund in real terms. To guarantee Mississippi can responsibly meet its financial obligations, even when average price changes exceed 1.5 percent, the general fund revenue cap should be indexed to the actual rate of inflation, not the lesser of inflation or an artificially low inflation factor.

While HB 531’s exemption phase-in approach to income tax repeal is likely the best way to garner political support, policymakers should consider reforming the income tax by lowering marginal rates instead. Exemptions provide a certain amount of relief to taxpayers, but they do little to encourage additional investment. When making decisions that affect future productivity and income, taxpayers care about what could happen to their next dollar more than they care about what has happened to their last dollar. Deciding whether to work more, whether to invest in machinery or employees, or whether to relocate to Mississippi, are decisions made on top marginal rates not intermediate rates.

Another caution to taking the exemption approach is the unwieldly income tax Mississippi could be left with, should the repeal process stall. If policymakers are unable to completely repeal the income tax due to changing revenue requirements or the loss of political will, Mississippi’s tax landscape could be dominated by five-figure exemptions and status quo rates. A narrow tax base bent toward high-income earners is not a system that retains investment, nor one that attracts new capital to the state.

Alternatively, if income tax repeal falters under a rate reduction approach, at least the state has regained a measure of competitiveness regionally—perhaps even nationally. Marginal rate reduction is a simpler approach that will continue to attract entrepreneurs and new residents looking for marginal gains on investment and cost of living even if total repeal fades.

Returning some of the state’s revenue growth to taxpayers is an investment that will yield long-term dividends for all Mississippians. Lawmakers know this, which is why HB 531 passed the House with strong bipartisan support. The same is possible in the Senate. But before declaring victory, it is imperative to get the details right. HB 531 is a drastic improvement over HB 1439, but there is still more work to be done if the Magnolia State is to sustain the intended transformation.

Don’t Buy This AI Stock Yet
Is the Worst Behind Netflix?
Time to Buy Airline Stocks?
Safety and Growth Rolled Into One
Google May Not Be King Much Longer