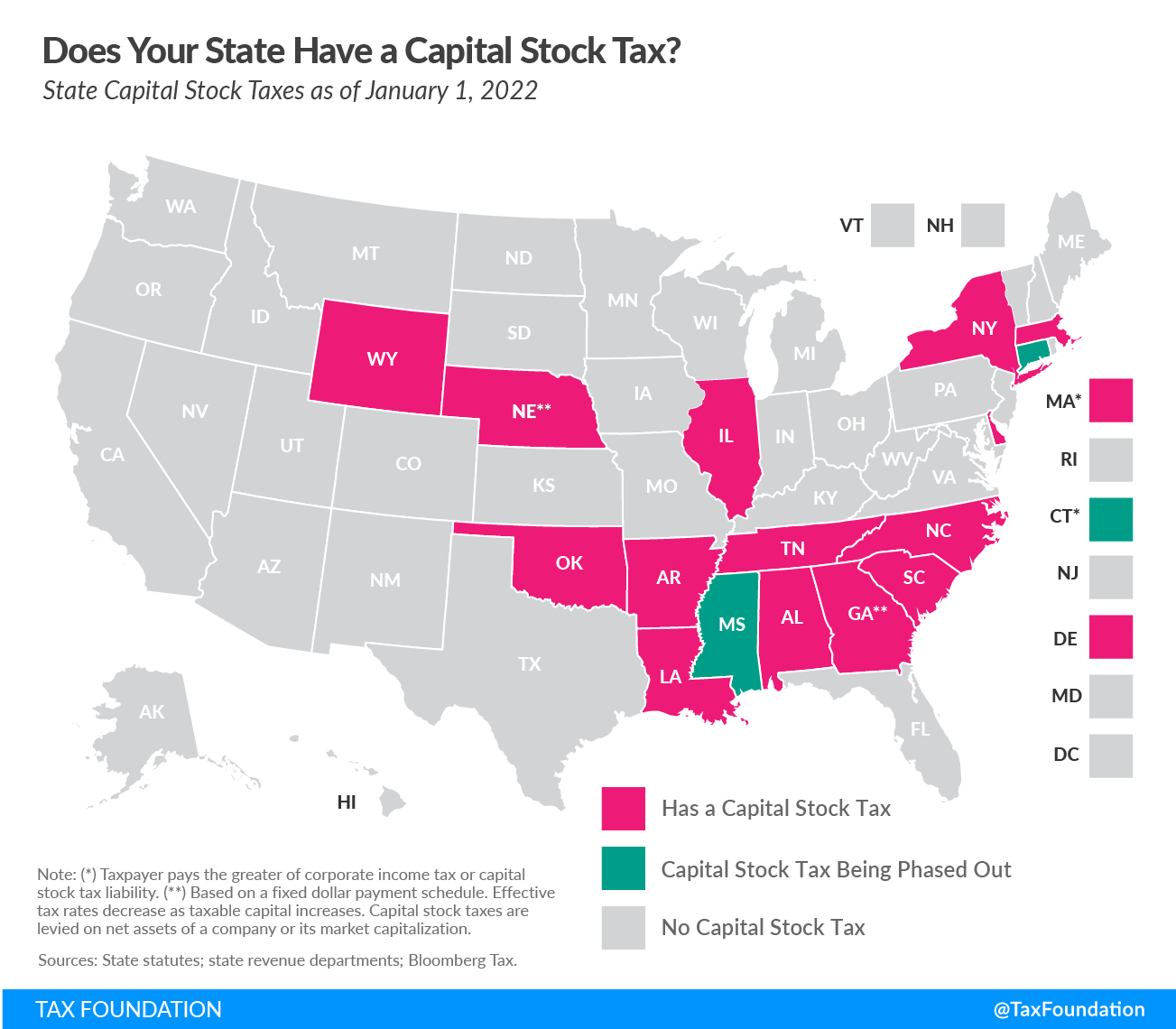 Today’s map looks at a barrier to state tax competitiveness in a time of increasing mobility: capital stock taxes.

Unlike corporate income taxes, which are levied on a business’s net income (or profit), capital stock taxes are imposed on a business’s net worth (or accumulated wealth). As such, the tax tends to penalize investment and requires businesses to pay regardless of whether they make a profit in a given year, or ever.

While exact formulas and methodologies vary from state to state, capital stock taxes are usually levied on a firm’s net assets, with rates ranging from a low of 0.02 percent in Wyoming to a high of 0.3 percent in Arkansas. Among the states that levy a capital stock tax, half place a cap on the maximum liability a business may be required to pay; the other half do not have a limit. Among the seven states with a cap, Georgia’s is the lowest at $5,000, while New York’s is the highest at $5 million.

In Georgia and Nebraska, the capital stock tax is based on a fixed dollar payment schedule, rather than on a percentage of net assets, with tax rates decreasing as taxable capital increases.

Taxing a company based on its net worth disincentivizes the accumulation of wealth, or capital, which in turn can distort the size of firms and lead to harmful economic effects. As legislators have increasingly recognized the damaging effects of capital stock taxes, many states have reduced them or repealed them altogether. Kansas completely phased out its capital stock tax prior to tax year 2011, followed by Virginia and Rhode Island in 2015 and Pennsylvania in 2016. Mississippi is in the process of phasing out its capital stock tax, which should be completely eliminated by 2028. Connecticut is also phasing out this tax, completing the process by 2024.

Only two states have retraced their steps. New York finished a phaseout of the state’s capital stock tax as of January 1, 2021, but the legislature decided to temporarily reinstate the tax due to coronavirus-related budget concerns. Similarly, Illinois had plans to exempt all capital stock from taxation by January 1, 2024. However, after two years, Illinois went back on its phaseout plan and opted instead to freeze the franchise tax exemption at $1,000.

States can better position themselves for success by moving away from economically-damaging taxes like the capital stock tax.

Saving Becomes A Thing Again
Is the Worst Behind Netflix?
Institutions are coming back into Crypto
Load Up Now on This ETF
Revenues up Triple Digits in the Past 3 Years