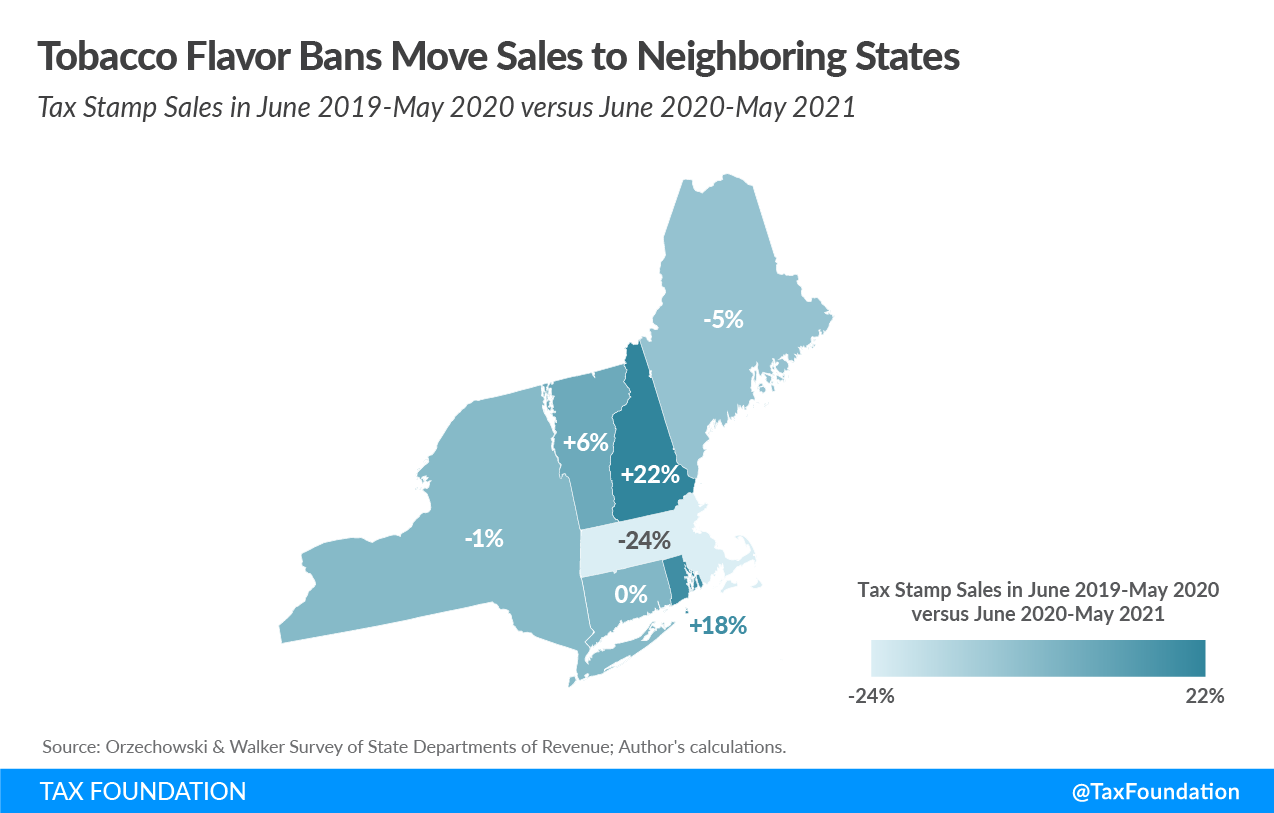 Such a result would indicate that the flavor ban has been a success. Unfortunately, the study left out a very important piece of information: cross-border trade. The end result of the ban, in fact, is that Massachusetts is stuck with the societal costs associated with consumption, while the revenue from taxing flavored tobacco products is being raised in neighboring states.

While the authors acknowledge this shortcoming in the study design, the omission severely skews the conclusion. In fact, the flavor ban has been far from successful, as sales in both New Hampshire and Rhode Island experienced double-digit growth—almost making up for the entire decrease in Massachusetts.

The study used scanner data to compare sales in Massachusetts with sales across the control states while simultaneously controlling for price, population growth, and a number of other factors. While this may seem to give a good indication of sales developments, the study only included one state that borders Massachusetts: Connecticut, where there was no real change in sales, chiefly because that state’s tobacco taxes are extremely high.

Focusing on the jurisdiction with the ban, and not considering the developments in the region, limits the usefulness of the data, as in-state sales only tell one side of the story.

We have previously explored the tax revenue impact of flavor bans (see here and here) and the increase in cross-border trade (several other groups have documented this as well: see here and here). We found, similar to the above-mentioned study, that in-state sales decreased significantly. For Massachusetts, that resulted in declines of tobacco excise tax revenue (cigarettes and smokeless tobacco) of $125 million for fiscal year 2021.

It stands to reason that if consumption truly disappeared, and these taxes were genuinely intended to account for the harms caused by the products, no one would be worried about such a loss in revenue—if consumption is gone, so are the societal costs associated with consumption. Unfortunately, flavor bans are basically literal laws of unintended consequences. The problem is that consumption has not disappeared following Massachusetts’ ban; sales to Massachusetts residents have merely moved out of the state.

In Massachusetts, the only state with a statewide flavor ban, sales data is available for the first 12 months following its implementation, meaning from June 2020 through May 2021. Sales in the Bay State declined by almost 24 percent compared to the 12 months preceding the ban. This decline translates to $116 million less cigarette tax revenue for Massachusetts (not including sales tax losses). The losses are even bigger if smokeless tobacco is included ($125 million). These sales moved to neighboring states: sales of cigarettes in New Hampshire increased by 22 percent and in Rhode Island by 18 percent. As such, this ban has not had a positive impact on public health; the only impact was on Massachusetts’ bottom line.

It is not surprising that sales of flavored tobacco products decreased in Massachusetts itself—the products are illegal to sell. But to control for cross-border trade, the authors of the study could have employed a regional analysis, comparing New England to the Mid-Atlantic, Gulf States, West Coast, etc. Had sales decreased more in New England than in those other regions, it would indicate that the flavor ban had been a success.

As it happens, looking at the New England region as a whole confirms that the flavor ban did not work as intended. Sales moved around rather than disappeared, and the ban evidently did not impact consumption. Total sales for the region decreased by slightly more than 1 percent comparing the 12 months preceding the ban to the 12 months following the ban—largely comparable to the national sales trends.

State tax coffers are not all that is impacted by this ban, however. Bans impact the small business owners operating vape shops, convenience stores, and gas stations, without necessarily reducing smoking overall.

This year, several states and the federal Food and Drug Administration are (or will be) considering following Massachusetts’ example by banning flavored tobacco products. Studies like the one published in JAMA Internal Medicine would indicate that doing so is beneficial to public health. However, lawmakers should think twice before implementing such bans. The experience out of Massachusetts has not been a success story and other states should be wary of conducting their own expensive experiments.

In addition, the ban on flavored tobacco highlights the complications of contradictory tax and regulatory policy, the instability of excise taxes that go beyond pricing in the cost of externalities, and the public risks of driving consumers into the black market through excessive taxation or regulation.

Saving Becomes A Thing Again
Revenues up Triple Digits in the Past 3 Years
A 10/10 Buffett Gem
Is the Worst Behind Netflix?
Load Up Now on This ETF